Hotel rich in history and tradition

The history of Hotel Lavica says that it is one of the most popular and oldest excursion places in Croatia, only 25 km from Zagreb. Hotel “Lavica” building as the surrounding buildings, including today’s Samobor Museum, was built in several stages. They were built on the property of noble Kralića. For the first time estate appears on the map of Samobor in 1764 made by Peter Anthony Praunsperger. At the end of the 18th century, the estate buys Royal Advisor Tisztpataky and continues to build a new comfortable castle. 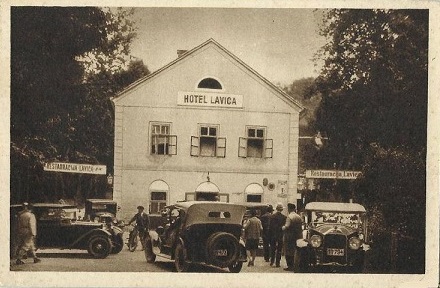 After the death of Tisztpataky in 1809th by his last will he left the entire estate to his nephew, violinist, pianist, composer, and leader of the Illyrian movement, the Croatian National Revival, Ferdi Wiesner Livadić. Ferdo Livadić spent the next 56 years on the estate and was the host of all the prominent people of that time and the leaders of the Illyrian movement.

Surrounding buildings were used as barns, cellars, gazebos, storage for wagons and coaches, a workshop for wheelwrights, blacksmiths, and apartments for servants and maids. The building of today’s hotel “Lavica”, was a stable with a hay barn.

In the mid 19th century the building was adapted and inside was placed the pharmacy of Milan Livadić, son of Ferde Livadić, later Franje Švarca, and Marka Cesarca. In the same building was the hall and reading room called DVORANA, as well as a few rooms in the front wing on the first floor of the building, where stayed the guests (known Illyrians: Ljudevit Gaj, Stanko Vraz, Peter Preradović, and others) when they came to visit family Livadić or to Samobor.

In the late 19th century Samobor pharmacist Mirko Klešić and doctor Juratović together reconstruct the Hydropathic bathing place with a spa and the owner of the estate opens a hotel and restaurant (“Pension”) for the accommodation of summer guests. The hotel had 17 rooms, a dining room, reading room, smoking room, entertainment room and kitchen where they already prepare vegetarian meals, pastry shop, where you could buy ice cream, cakes, milk, kefir and so-called “šnenokle”.

In the early years of the 20th century (1904) the hotel and restaurant were purchased by Dattler, supplementing the hotel offer, and opened a ballroom. Since then “Lavica” became an increasing factor in Samobor in the social and tourism life.

They organized numerous parties of Samobor societies, dance wreaths, Carnival balls, redute, concerts, theater performances, lectures, literary evenings, and cinema shows. In the summer of 1904, the hotel hosted over 1000 home and foreign bathing guests. In 1904 the hotel starts a tourist paper called LJETOVALIŠNI VJESNIK SAMOBORA, and later published in the Samobor newspaper where it brings monthly reports of guests who have visited the hotel.

Early 1918 hotel (“Pension”) with a cinema was bought by a joint-stock company “HERMES” from Zareb. The new hotel manager is Dragutin Freunderich (also known as a theater artist), who renewed and modernized the hotel and built a new bridge over Gradna River with a roof and balconies, and changed the hotel’s name to LAVICA.

HISTORY OF THE NAME LAVICA

President of joint-stock company “Hermes” was dr. Vladimir Matić. When dr. Matic with his wife and daughter Leonarda, drove from Zagreb on the 10th of July 1918 to approve the construction works and equipment in the restaurant and hotel, across the new bridge to meet them came Dragutin Freungerich, he warmly greeted them by saying that the adaptation of the hotel was completed and that the hotel can be seen and put into service. 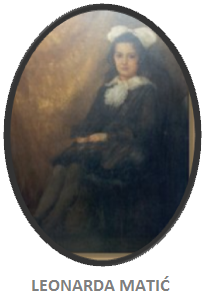 Then Matić showed him a big sign “LAVICA HOTEL” (Lioness hotel) made of wrought iron high on the facade of the building (that even today stands so), and said: “I hope you will not get angry that I named the hotel and restaurant by your dear daughter Lavica”.

From the twenties of the 20th-century stock company Hermes and hotel “Lavica” managed by Kazimir Kopas, which is known because has supplemented the gastronomic specialties. In advertisements, he recommends homemade ham, soups, roasts, salads, stews, fresh hot dogs, homemade garlic sausage, roast ribs, a variety of cakes (gibanica Lavica and the so-called “šnenokle”), and from the drinks fine wines, black double malt beer, etc.

From the thirties to the end of the Second World War Lavica was the meeting place for motorists, excursionists, and hikers. After the end of the Second World War came a crisis period for the hotel, Lavica has become the social property and was managed more or less successfully. The sixties of the 20th-century hotel and restaurant are part of HUP Risnjak from Zagreb. In 1966 company starts reconstruction and builts a new wing of the restaurant, the adaptation lasted until 1973. HUP Risnjak is neglecting Lavica so the hotel operates in very difficult conditions so the workers themselves demand that the hotel operates as a separate organization of associated labor -OOUR. Then workers struggled to restore the old building’s reputation, which has been lost in mismanagement, and in which they partially succeeded.

Back then “Lavica” had 24 beds. In 1983. “Lavica” is again part of the new company HURO Zagreb, which rented 10 rooms at the hotel as an office space, the hotel was again renovated and in the fall of 1984 has 50 beds, a restaurant for 80 guests, and a big restaurant hall was transformed into a discotheque. From 1990 onwards a hotel is not invested due to unresolved ownership relations as well as the start of the war in Croatia.

From 1990 till 1994 hotels are located for refugee families and with their departure hotels goes under the company INGAP d.o.o. Samobor and the hotel close. In 2001 company AUTOTURIST SAMOBOR d.o.o. buys “Lavica” and I return to the hotel’s old glow. Company renews the hotel – rooms, reception, kitchen, big hall, restaurant, facade, roof, parking lot, installation, etc. In the first stage of renovation, the hotel had 22 rooms with 45 beds. Today the hotel has 34 rooms with 74 beds. The reconstruction has complied with all the existing legal requests so the hotel fulfills the conditions for a four **** stars hotel but because of the cultural monuments and square footage of rooms, the hotel has a category of 3 *** stars hotel.

The hotel building is listed in the Register of cultural monuments and bears zero categories of historical value.

We use cookies on our website to give you the most relevant experience by remembering your preferences and repeat visits. By clicking “Accept All”, you consent to the use of ALL the cookies. However, you may visit "Cookie Settings" to provide a controlled consent.
Cookie SettingsAccept All
Manage consent

This website uses cookies to improve your experience while you navigate through the website. Out of these, the cookies that are categorized as necessary are stored on your browser as they are essential for the working of basic functionalities of the website. We also use third-party cookies that help us analyze and understand how you use this website. These cookies will be stored in your browser only with your consent. You also have the option to opt-out of these cookies. But opting out of some of these cookies may affect your browsing experience.
SAVE & ACCEPT